I have certainly fallen asleep for the sudden announcement startles me. My co-passengers on the flight to Leh from New Delhi are preparing to disembark but they cannot hide their frustration which, later on, turns into anger. We boarded the aircraft almost one hour earlier and have waited patiently for the weather to clear up, not in Delhi, but at Leh, our destination in Ladakh, Jammu & Kashmir. It being the month of February, cancellation of a flight to Leh is nothing unexpected. We have taken the risk – we all are aware of the risk.

Once we come back to the terminal building, we immediately seek booking in the next day’s flight but we are flatly refused. The other passengers, of whom the most are natives of Ladakh, are not ready to throw in the towel. Their demand is simple. They have managed the airfare with great difficulty only to reach home for the festival season. The surface routes via Srinagar or Manali are closed for the winter. The Airlines must accommodate them. A Buddhist Lama of somewhat middle age, along with two or three younger lamas is escorting a group of 15-20 children back to Leh after an excursion to Delhi, Agra and Bodh Gaya. He lets the airlines authority know that he and his children are going nowhere till they are given new tickets.

Happily enough the authority gives in to the demand of the passengers. We have to lose one day in Delhi but next day the weather at Leh smiles and our flight takes off without much delay. In a hour, we are over Leh enveloped in white. Our aeroplane touches the runway of Kushok Bakula Rinpoche Airport . Only then we breathe easily again.

So here is a word of caution for all those who plan to visit Ladakh in winter. Have extra days in your hand for unexpected hiccups. The tour is not going to be a smooth one. We lose days at the beginning, the middle and the end of the tour. In this post I talk about the beginning only. Soon the rest will be exposed in this blog. 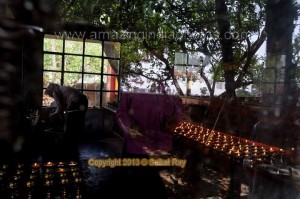 The 14th Dalai Lama established a Tibetan government in exile in India almost 50 years ago. More than 150,000 Tibetan refugees have fled to India during the past 50 years and they are rehabilitated in Camps all over India by our govt. I have visited such two camp which are nearer to Kolkata. The young Tibetans who are not attached to monastery, have a lifestyle heavily influenced with western culture. But the old people who actually undertook the legendary march from Tibet to India lead a traditional life. The most interest thing is that some are 80-90 years old but they lead an active life. Calmly waiting for emancipation, the senior Tibetans continues with less care for the world and a strong faith in Buddha.

It is really interesting to watch Tibetan children whose ancestors might have never seen a pond, are swimming in ponds.

“Let’s embark on a visual quest into the heart of amazing India, the land of eternal pleasure bestowed upon with the Nature's benevolence in the forms of exciting landscapes, vast culture and haunting heritage.”